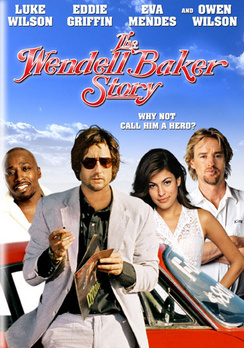 SKU 821575555753
$6.00
Out of stock
1
Product Details
Year: 2007
Rated: PG-13, some crude and sexual humor and language
Genre: Comedy, Drama
Runtime:
Studio: ThinkFilm
Directed by: Andrew Wilson, Luke Wilson
Starring: Luke Wilson, Owen Wilson, Eva Mendes, Seymour Cassel, Harry Dean Stanton, Jacob Vargas, Kris Kristofferson, Eddie Griffin
Description: Wendell Baker is a good-hearted conman whose latest scam lands him in jail and alienates him from everyone he loves, including his longtime girlfriend Doreen, his best friend Reyes, and even his devoted dog, Junior. Eternally optimistic, Wendell makes the most of his time behind bars and vows to turn his life around. Upon release, he gets a job at the Shady Grove Retirement Hotel, where he befriends residents Boyd, Skip and Nasher. Wendell's new friends help him to win back his girlfriend, while he leads them in a spirited rebellion against the hotel's evil head nurse, Neil King and his right-hand man, McTeague.
Save this product for later