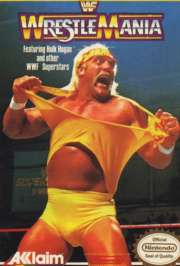 SKU 021481105015
$8.00
Out of stock
1
Product Details
If you can “Smell what The Rock is cookin’”—and you like it—then you’ll enjoy the history lesson provided by WWF WRESTLEMANIA for the Nintendo Entertainment System. Featuring some of the legendary grapplers that helped the WWF rise to power in the ‘80s—Hulk Hogan, Randy “Macho Man” Savage, Andre the Giant, Honky Tonk Man, Ted “Million $ Man” DiBiase, and Bam Bam Bigelow—you’ll enter the ring for some intense body-slamming action. Go for the WWF Championship Belt against the computer opponents or stage your own tournament with up to five friends and see who really is the King of the Ring. So step back in time and get a taste of a bygone era in the WWF with WWF WRESTLEMANIA.
Save this product for later