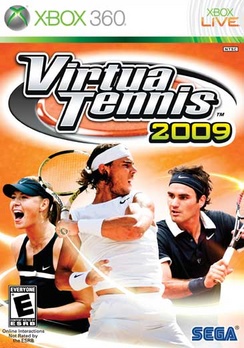 SKU 010086680362
$12.00
In stock
1
Product Details
Virtua Tennis 2009 will again allow you to take on the world’s top tennis players in some of the most realistic courts to be found on gaming consoles. Take on the likes of Rafael Nadal and Roger Federer or play as Maria Sharapova against Venus Williams to recreate some classic court battles. Joining this impressive roster of tennis stars are several new players for 2009, including men’s World No.4 Andy Murray and ladies French Open champion Ana Ivanovic. In addition to the traditional singles, doubles and mixed doubles matches, Virtua Tennis 2009 will also have the official Davis Cup license, giving players the coveted opportunity to lead their country to glory! Virtua Tennis 2009 has extensive additions and detailed improvements to the classic arcade-style match engine like no other tennis game available. Player stumbling adds a new dimension to matches, while improved volleying, serving and net play allow you to express yourself on court like never before. In addition, the popular World Tour Mode has been given innovative new features offering a fully integrated online system, and new online ranking system available for the PlayStation 3 and Xbox 360. Along with numerous other additions the Player Creation System in World Tour Mode has also been expanded, and a new look Tennis Store containing over 800 items will enable players to create their own unique Virtua Tennis Champion!
Save this product for later