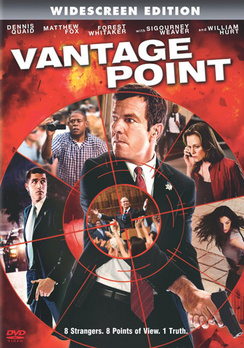 SKU 043396216167
$4.00
In stock
1
Product Details
Eight strangers with eight different points of view try to unlock the one truth behind an assassination attempt on the president of the United States. Thomas Barnes (Dennis Quaid) and Kent Taylor (Matthew Fox) are two Secret Service agents assigned to protect President Ashton (William Hurt) at a landmark summit on the global war on terror. When President Ashton is shot moments after his arrival in Spain, chaos ensues and disparate lives collide in the hunt for the assassin. In the crowd is Howard Lewis (Forest Whitaker), an American tourist who thinks he's captured the shooter on his camcorder while videotaping the event for his kids back home. Also there, relaying the historic event to millions of TV viewers across the globe, is American TV news producer Rex Brooks (Sigourney Weaver). As they and others reveal their stories, the pieces of the puzzle will fall into place -- and it will become apparent that shocking motivations lurk just beneath the surface.
Save this product for later