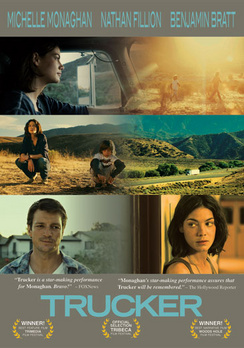 SKU 012233464320
$10.00
In stock
1
Product Details
Diane Ford (Michelle Monaghan), a vivacious and successful independent truck driver, leads a carefree life of long-haul trucking, one night stands and all-night drinking with Runner (Nathan Fillion) until the evening her estranged 11-year-old son, Peter (Jimmy Bennett) is unexpectedly dropped at her door. Peter hasn’t seen his mother since he was a baby and wants to live with Diane as little as she wants him, but they are stuck with each other – at least for now, while his father Len (Benjamin Bratt) is in the hospital. Burdened with this new responsibility and seeing the life of freedom she’s fought for now jeopardized, Diane steps reluctantly into her past and looks sidelong at an uncharted future that is not as simple or straightforward as she had once believed possible.
Save this product for later