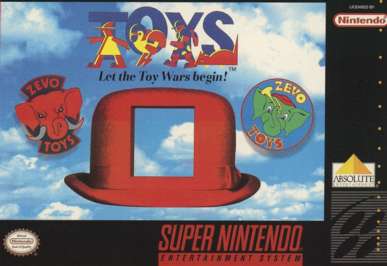 SKU 018706102935
$5.00
In stock
1
Product Details
It used to be the happiest toy factory in the world, but General Zevo has changed the place to a military manufacturing plant and ruined the spirits of the workers. Now, Zevo’s nephew, Leslie, is the only man with the courage to stand up to the power-hungry General…but is it too late? Based on the hit movie of the same name, TOYS is a wild romp through a wacky bunch of environments. Armed with hundreds of toys and novelty items, you control Leslie through the factory, ultimately earning a showdown with your uncle on a miniature New York City skyline. With stunning graphics and character animations, plus some of the most original gameplay you’ll ever find, TOYS is every bit as fun as it sounds.
Save this product for later