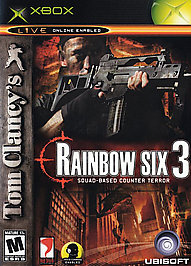 SKU 008888510147
$5.00
In stock
1
Product Details
RAINBOW SIX: Raven Shield features a brand new Tom Clancy storyline in which Team Rainbow is led all over the world in a string of dramatic operations. The game will utilize graphics technology provided by the next-generation Unreal engine to power 15 new single-player missions that include the discovery of a cache of biological weapons and stopping an armed gang from terrorizing a London bank.
Save this product for later