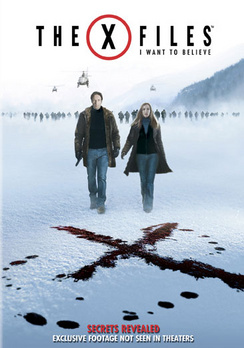 The X Files: I Want to Believe - Widescreen - DVD - Used

SKU 024543543510
$6.00
In stock
1
Product Details
In grand The X-Files tradition, the film's storyline is being kept under wraps, known only to top studio brass and the project's principal actors and filmmakers. This much can be revealed: The supernatural thriller is a stand-alone story in the tradition of some of the show's most acclaimed and beloved episodes, and takes the always-complicated relationship between Fox Mulder (Duchovny) and Dana Scully (Anderson) in unexpected directions. Mulder continues his unshakable quest for the truth, and Scully, the passionate, ferociously intelligent physician, remains inextricably tied to Mulder's pursuits. Months after shooting had wrapped, Carter remained as circumspect about the story as he was during its development and production. 'Mulder and Scully are drawn back into the world of the X-Files by a case,' is all he'll add about the plot. Perhaps more clues...to something....can be found in the film's title. 'I Want to Believe' is a familiar phrase for fans of the series; it was the slogan on a poster that Mulder had hanging in his office at the FBI. 'It's a natural title,' says Chris Carter. 'It's a story that involves the difficulties in mediating faith and science. It really does suggest Mulder's struggle with his faith.' Carter is much more revealing about his goals for the film. 'Simply put, we want to scare the pants off of everyone in the audience,' he says. While the scale and scope inherent in the medium of film allowed the filmmakers to take the story and characters where the show couldn't go, Carter says THE X-FILES: I WANT TO BELIEVE also marks a return to the series' roots, when it was the lone beacon on television for fans of thrillers, supernatural tales, and of horror stories. 'The film encompasses all the best things people loved about the show. It's scary, creepy, and has a good mystery. With The X-Files, we often scared people by what they didn't show, and we use that device for the movie.' Adds writer-producer Frank Spotnitz: 'I think the best part of The X-Files was that it could make you afraid of anything. They didn't tell typical horror stories or adhere to popular genre conventions. And this movie is in that tradition of showing things that you would not see in most scary movies.' Unlike the first The X-Files motion picture, released in 1998, Carter and Spotnitz's story for THE X-FILES: I WANT TO BELIEVE does not require audiences to understand the series' complex mythology that stretched across its nine seasons on the air. 'The first movie was kind of an epic episode of the show, but THE X-FILES: I WANT TO BELIEVE is a real, stand-alone movie,' explains Carter. 'If the show hadn't existed, this is a story that still would have found its way to the big screen.'
Save this product for later