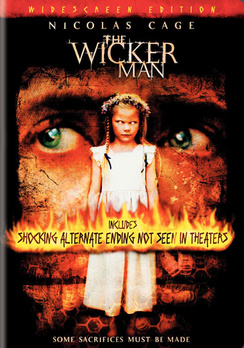 SKU 085391100935
$6.00
In stock
1
Product Details
Out patrolling a California highway, police officer Edward Malus stops a station wagon to return a little girl's lost doll. Moments later, a runaway truck slams into the station wagon, igniting it into a fiery wreck with the mother and child trapped inside. Edwards fails to save them before the car explodes--and then spends months of his life choking down pills to get the image of their faces out of his head. But Edward is about to get a second chance. A desperate letter from his former fiancee, Willow, arrives at his home with no postmark. Willow came into his life and left just as unexpectedly years before. But now, her daughter Rowan has gone missing, and Edward is the only person she trusts to help relocate her. She asks him to come to her home on a private island--Summersisle--a place with its own traditions where people observe a forgotten way of life. Edward seizes the opportunity to make his life right again, and soon finds himself on a seaplane bound for the islands of the Pacific Northwest. But nothing is what it seems on isolated Summersisle, where a culture, dominated by its matriarch Sister Summersisle, is bound together by arcane traditions and a pagan festival known as 'the Day of Death and Rebirth.' The secretive people of Summersisle only ridicule his investigation, insisting that a child named Rowan never existed there--or if she ever did was no longer alive. But what Edward doesn't know is that Willow's plea for help has invited more into his life than a chance for redemption. In unraveling Summersisle's closely held secrets, Edward is drawn into a web of ancient traditions and murderous deceit, and each step he takes closer to the lost child brings him one step closer to the unspeakable. And one step closer to The Wicker Man.
Save this product for later
Display prices in: USD