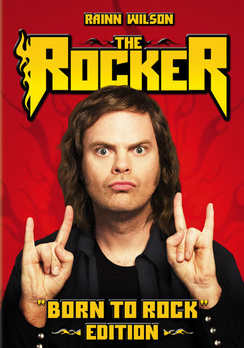 SKU 024543572916
$4.00
In stock
1
Product Details
In this rockin' mix of physical comedy, heart and garage band/power rock/heavy metal music, 'The Office's' Rainn Wilson trades his paper company desk job for rock 'n' roll fame, taking on the role of a big, sweaty, out-of-control - and sometimes naked - drummer who gets a second chance at rock superstardom. He's joined by Christina Applegate ('Anchorman: The Legend of Ron Burgundy'), Jeff Garlin ('Curb Your Enthusiasm'), Josh Gad ('21'), pop star Teddy Geiger and Emma Stone ('Superbad'). When we first meet Fish, he and his bandmates from Vesuvius are in full '80s glory - knocking out headbanging songs and sporting big hair, scarves, and impossibly tight leather pants. Just as Vesuvius is about to break big, Fish is tossed out of the band. Flash-forward twenty years: the ex-drummer extraordinaire, who lived, ate, breathed, slept - and most of all, sweated - rock n' roll, works for an insurance company and is living with his sister, brother-in-law and nephew Matt. In short, Fish is a broken man, stuck in a mid-life crisis. But when he learns that Matt's band, A.D.D. is searching for a new drummer, Fish volunteers - well, really, he begs - for a shot. Fish is over two decades older than his bandmates, yet somehow he completes A.D.D.: the brooding, hair-in-the-face singer Curtis; the stiff-as-a-board supernerd Matt; the ironic post-modern punk girl Amelia - and now the ancient rocker, Fish. Spurred by Fish's habit of rehearsing in the buff (and hip new moniker 'The Naked Drummer'), A.D.D. becomes an internet sensation. They hit the road for their first big tour - along with Curtis' mom, Kim, as a chaperon. But as Fish once again lives the rock and roll life he thought was almost a birthright, he begins a journey that will take him to a place even he never thought possible: adulthood.
Save this product for later