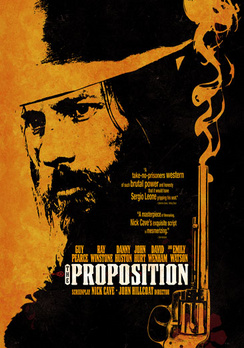 SKU 687797112194
$4.00
In stock
1
Product Details
Set against the harsh and unforgiving landscape of the 1880s Australian outback, The Proposition is a visually stunning tale of loyalty, revenge and the quest for justice in a lawless land. Charlie Burns (Guy Pearce) is a renegade. Along with his two brothers, Arthur (Danny Huston) and Mikey (Richard Wilson), he is wanted for murder. When Captain Stanley (Ray Winstone) captures Charlie and Mikey, he offers Charlie a proposition in an attempt to end the brutality that surrounds them -- the only way to save Mikey from the noose is for Charlie to track down and kill Arthur, his psychotic older brother. An impossible moral dilemma leads to a murderous climax.
Save this product for later