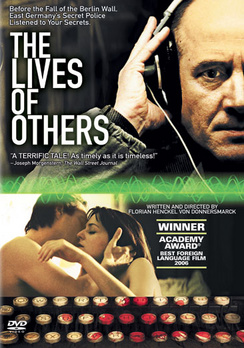 The Lives of Others - Widescreen - DVD - Used

SKU 043396170858
$6.00
In stock
1
Product Details
Before the collapse of the Berlin Wall, East Germany’s population was closely monitored by the State Secret Police (Stasi). Only a few citizens above suspicion, like renowned pro-Socialist playwright Georg Dreyman, were permitted to lead private lives. But when a corrupt government official falls for Georg's stunning actress-girlfriend, Christa, an ambitious Stasi policeman is ordered to bug the writer’s apartment to gain incriminating evidence against the rival. Now, what the officer discovers is about to dramatically change their lives -- as well as his -- in this seductive political thriller.
Save this product for later
Display prices in: USD