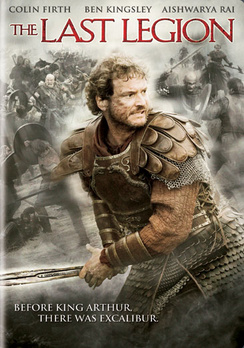 SKU 796019807753
$3.00
Out of stock
1
Product Details
Year: 2007
Rated: PG-13, sequences of intense action violence
Genre: Adventure, Fantasy
Runtime: 110
Studio: The Weinstein Company
Directed by: Doug Lefler
Starring: Colin Firth, Ben Kingsley, Aishwarya Rai, John Hannah, Kevin McKidd, Peter Mullan, Iain Glen, Thomas Sangster, Nonso Anozie
Description: “The Last Legion” is a fantasy action-adventure in the vein of “The Sword and the Stone” set against the fall of Rome and its last emperor, 12 year-old Romulus Augustus, the boy who would rule for a day before losing all that he loved: his family, his home, and an empire that once stood for truth and honor. Imprisoned on the island-fortress of Capri, Romulus searches for a means of escape. He discovers instead “excaliburnus,” the legendary sword of Julius Caesar, and realizes that he must do all in his power to save Rome. Aided by the clever strategies of his teacher, Ambrosinus, and the heroic skills of his loyal legionnaire, Aurelius, Romulus escapes the island. Accompanied by his friends and a mysterious envoy from Constantinople, Romulus travels to Britannia in search of the last Roman Legion – the fabled Dragon Legion. There, Romulus will fight alongside his friends to make his last stand for Rome and take his first steps to becoming a man and he king who would father a legend.
Save this product for later