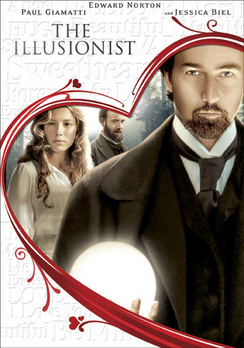 SKU 024543402374
$4.00
In stock
1
Product Details
A supernatural mystery that combines romance, politics and magic, The Illusionist is the latest film from the producers of the Oscar winners Crash and Sideways. The film stars Academy Award nominees Edward Norton and Paul Giamatti as two men pitted against each other in a battle of wits: Norton as mysterious stage magician Eisenheim, and Giamatti as Vienna's shrewd Chief Inspector Uhl, with Jessica Biel sharing the screen as the beautiful Sophie von Teschen. When word of Eisenheim's astounding illusions reaches the powerful and pragmatic Crown Prince Leopold (Rufus Sewell), the ruler attends one of the magician's shows in order to debunk Eisenheim during the performance. But when the Prince's intended, Sophie von Teschen, assists the magician onstage, Eisenheim and Sophie recognize each other from their childhoods
Save this product for later