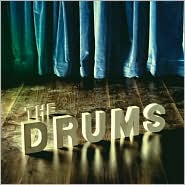 The Drums The Drums

The Drums became the buzz band of summer 2009 with the irresistible Summertime! EP, and their self-titled debut album arrived a year later with the song that generated all the commotion. "Let's Go Surfing" is re-recorded here, boasting major-label polish and softer, more thoughtful verses, but that whistled hook is as irrepressible as ever, and as instantly recognizable as Peter Bjorn and John's "Young Folks" was a few years earlier. The rest of The Drums makes it even clearer that the band isn†t afraid to be pop with a capital P, and that the Drums know and love every trick in the pop handbook. The album is drenched in glossy reverb and awash in handclaps and harmonies, all of which help unite the band's fetishes for spindly '80s indie guitars, innocent '50s melodies, and tinny drum machines and synths. They've also got a knack for picking singles: "Forever and Ever Amen" has some bite in its beats, but it†s still a perfect soundtrack to a summertime fling; the ultra post-punky "It Will All End in Tears" is the brisk and heartbroken aftermath. Indeed, the poignancy of summer giving way to fall informs many songs on The Drums, and the bandmembers spend as much time with tears in their eyes as they do going to the beach. They're skilled at writing lonesome love stories such as "Me and the Moon" and joyous breakup songs like "Book of Stories," both of which bury their sting with jaunty melodies and synth washes. As immediate as the band's songs are, their workings are interesting in their own right. The way the Drums juxtapose the heightened emotions of '50s and early-'60s pop with the often-jaded moods of post-punk and indie is fascinating, with "Down by the Water"'s slow dance haze sharing space with "Best Friend"'s impatient yelps. The way their riffs borrow equally from Buddy Holly and the Smiths shows that the jangly simplicity of those styles isn†t so far removed after all. Even when the band's songwriting falters -- "I Need Fun in My Life" and "I'll Never Drop My Sword" are a touch too simple and repetitive compared to what came before -- The Drums' sound is still distinctive, and even if the album feels a little calculated at times, it's still greater than the sum of its parts.