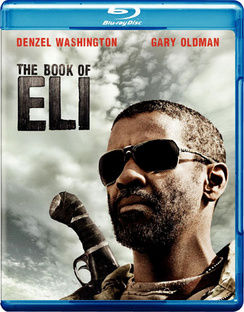 SKU 883929103423
$8.00
In stock
1
Product Details
Year: 2010
Rated: R, some brutal violence and language
Genre: Action, Science Fiction
Runtime: 118
Studio: Warner Bros.
Directed by: Allen Hughes, Albert Hughes
Starring: Denzel Washington, Mila Kunis, Gary Oldman, Ray Stevenson, Jennifer Beals, Malcolm McDowell, Tom Waits, Michael Gambon, Chris Browning, Luis Bordonada
Description: In the not-too-distant future, some 30 years after the final war, a solitary man walks across the wasteland that was once America. Empty cities, broken highways, seared earth--all around him, the marks of catastrophic destruction. There is no civilization here, no law. The roads belong to gangs that would murder a man for his shoes, an ounce of water... or for nothing at all. But they're no match for this traveler. A warrior not by choice but necessity, Eli seeks only peace but, if challenged, will cut his attackers down before they realize their fatal mistake. It's not his life he guards so fiercely but his hope for the future; a hope he has carried and protected for 30 years and is determined to realize. Driven by this commitment and guided by his belief in something greater than himself, Eli does what he must to survive--and continue. Only one other man in this ruined world understands the power Eli holds, and is determined to make it his own: Carnegie, the self-appointed despot of a makeshift town of thieves and gunmen. Meanwhile, Carnegie's adopted daughter Solara is fascinated by Eli for another reason: the glimpse he offers of what may exist beyond her stepfather's domain. But neither will find it easy to deter him. Nothing--and no one--can stand in his way. Eli must keep moving to fulfill his destiny and bring help to a ravaged humanity.
Save this product for later
Display prices in: USD