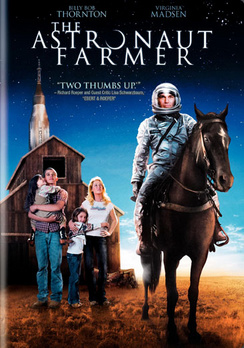 SKU 012569822924
$4.00
In stock
1
Product Details
From the time he was a child, Charles Farmer had only one goal: to be an astronaut. Earning his degree in aerospace engineering and joining the Air Force as a pilot, Farmer was a natural for NASA's astronaut training program and was well on his way when a family situation forced him to drop out. But Farmer was not a man to let anything stand in the way of a dream. He spent the next decade and every cent he had building his own rocket in a barn on his ranch in Story, Texas, working toward the day when he could triumphantly launch it into space. By himself. Sharing his vision are his wife Audie and their children - daughters Sunshine and Stanley, and 15-year-old Shepard, already a budding engineer and eager to serve as 'mission control' on the big day. Even Audie's father Hal, on hand to lend moral support, can see how his son-in-law's unwavering commitment has inspired the family with a common dream. On the eve of the long-anticipated launch, an unexpected problem arises. Farmer's efforts to secure 10,000 pounds of high-grade fuel catches the attention of the FBI - and subsequently the media, who encamp in droves outside his gate. Farmer finds himself depicted on TV screens worldwide as a renegade hero, inspiring an outpouring of popular support, while simultaneously drawing heavy fire from the FBI, CIA, FAA, NASA and the U.S. Military, all of whom see him as a threat and will do anything they can think of to shut him down. But Farmer knows this is his only chance - not only to reach his goal of breaking through the Earth's atmosphere but to instill in his children the courage to pursue their own ideals and never give up, no matter the odds. He will not let himself be grounded again.
Save this product for later