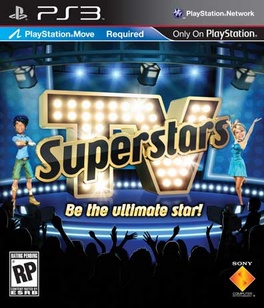 SKU 711719822424
$8.00
In stock
1
Product Details
How will YOU be immortalized? Culinary master? Stylish supermodel? Unbeatable game show champion? Cook, model, and battle your way beyond 15 minutes of fame and into celebrity stardom! Use the game’s unique face-capture technology through the PlayStation®Eye camera to place you, your friends and your family right into the starring roles of five action-packed TV shows. Then use your PlayStation®Move motion controller to physically compete and rise to the top of the "A list" to become a household name. Get ready to strut across the red carpet in the international world of fashion. Show off your athletic prowess and perform daring stunts in a chaotic game show, turn up the heat as you cook and rap in a hip hop cooking show, and try not to bring the house down while competing in a home make-over show. Do you have the on screen presence to make advertisers clamor for you to star in their commercials and on their billboards? Give fans a reason to become obsessed and follow your every move. Grab the headlines in the celebrity tabloids, battle it out on the red carpet, pose for paparazzi photographs, and use the PlayStation®Move motion controller to sign autographs for fans as you become the Star you’ve always wanted to be! Key Features Star in 5 TV Shows: - Shoot paint cannons and perform stunts in “Let’s Get Physical”. - Take center stage and model your way to stardom in “Frock Star” - Paint, saw and hammer through a range of dynamic actions in “DIY Raw” a celebrity homes makeover show - Dish it up and sing in “Big Beat Kitchen” - Perform and record your own TV commercials in “Super, Television, Acting, Agency” Rub shoulders with famous show hosts and knock your friends and family off the “A list” as you progress through the challenging life of a Gameshow Superstar. Perform a fabulous range of dynamic PlayStation®Move motion controller actions that put you in the game like never before. Use the PlayStation®Eye camera to capture your likeness and emotions in game, which you will see being played back when you are doing well or making a mess of your career, and use your voice to create in-show shout outs. Win challenges, gain popularity and become famous! Secure the opportunity to record lucrative product endorsements and to see your face and name on game billboards and TV commercials. Watch as your progress is tracked through tabloid magazines to chart your popularity.
Save this product for later