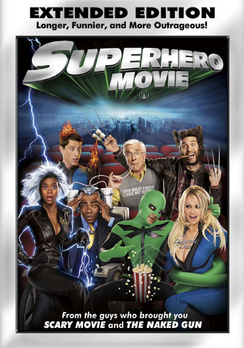 SKU 796019813396
$3.00
In stock
1
Product Details
Finally, the guys behind the outrageously silly Scary Movie franchise have used their own ‘special powers’ to spoof superhero movies. After being bitten by a genetically altered dragonfly, high school loser Rick Riker develop superhuman abilities like incredible strength and armored skin. Rick decides to use his new powers for good and becomes a costumed crime fighter known as “The Dragonfly”. However, standing in the way of his destiny is the villainous Lou Landers. After an experiment gone wrong, Lou develops the power to steal a person’s life force and in a dastardly quest for immortality becomes the supervillain, “The Hourglass.” With unimaginable strength, unbelievable speed and deeply uncomfortable tights, will the Dragonfly be able to stop the sands of The Hourglass and save the world? More importantly, will we stop laughing long enough to notice?
Save this product for later