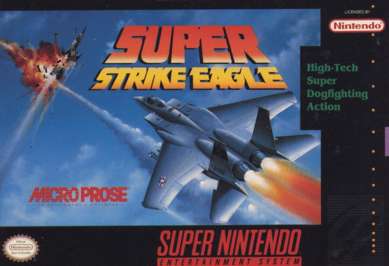 SKU 019703160201
$5.00
In stock
1
Product Details
If you’ve always thought you could do it better than Tom Cruise did in TOP GUN or if you’ve just always wanted to fly off into the wild blue yonder, now’s your chance with SUPER STRIKE EAGLE for the Super Nintendo. Slide into the cockpit and behind the controls of one of the most advanced jet fighters in the world, as you get ready to strut your stuff against some of the most talented and dangerous pilots you’ve ever seen. Several war theaters to take part in, as well as countless missions will test your abilities and include everything from attacks on ground targets to strategic strikes. One feature of this game that really jumps out at you and sucks you in is the graphics, which feature intricately detailed planes—right down to the bolts on the wings. So if you’re ready, fly boy, then pick a nickname, and get ready for SUPER STRIKE EAGLE.
Save this product for later