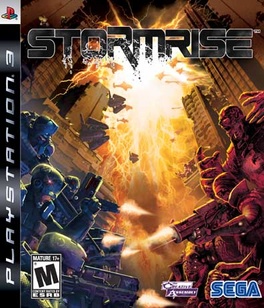 SKU 010086690255
$10.00
In stock
1
Product Details
Lead from the front in the world’s most immersive and first truly 3D RTS Assume command on the frontlines of battle! Experience the rush of battle in ways no other real-time strategy game has ever offered. Stormrise is the first truly 3D, next-gen RTS that, via the 3rd person camera perspective, puts you directly in the action. No other RTS game combines this level of immersion and emotional intensity with the scale and depth of a strategy game. Designed for next generation consoles (PLAYSTATION®3 and Xbox 360), Stormrise puts you on the frontlines of battle as the heroic leader of your troops, allowing you to lead from the front in the world’s most immersive RTS. Earth’s protective atmosphere has been stripped away by a catastrophic event centuries ago. In a bleak and barren landscape, the planet’s inhabitants have had to adapt radically in order to survive, resulting in the creation of two distinctly different races; the Echelon and the Sai. With both factions constantly battling for supremacy, the rebuilt civilisation is on the brink of another catastrophe… • Lead from the front - Control units and issue commands while viewing the battle from the 3rd-person POV of any unit on the battlefield. The 3rd-person camera offers unprecedented immersion in the game world and presents warfare in a more visceral, emotional, and epic manner than ever before. • The first fully 3D RTS - Gone are the flat levels of traditional strategy games. Engage in warfare on battlefields comprised of sprawling cities and towering skyscrapers that let you play in a truly 3D environment • Revolutionary Console RTS Features - Groundbreaking control method for quick and intuitive controls. ‘Tactical Playbook’ which gives players all the strategic choice they get from a traditional RTS, but with the simplicity and accessibility of a playbook • Advanced Multiplayer Features - Multiplayer modes feature “join anytime” functionality, previously only seen on First Person Shooters and a breakthrough for console strategy titles.
Save this product for later