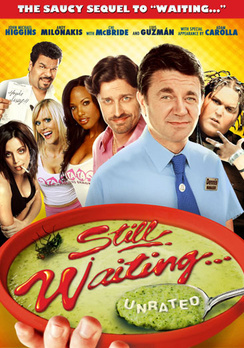 SKU 031398105268
$4.00
Out of stock
1
Product Details
This outrageous sequel to WAITING follows the continuing adventures of the wait staff at Shenaniganz restaurant. Many familiar faces are still there, showing a new generation of servers the ropes. Two years have passed, and Shenaniganz is dealing with stiff competition from the new Ta-Ta's Wing Shack next door. All the 'best' waitresses have bolted to the wing joint - where the clothes are shorter and the tips bigger - and customers are following. The heat is on the Shenaniganz team to smash the competition, lift their numbers (and their hemlines), and remind the public who's got the tastiest fast food in town - before it's curtains for their restaurant.
Save this product for later
Display prices in: USD