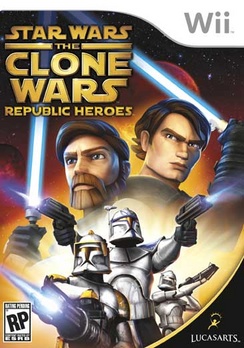 SKU 023272338633
$12.00
In stock
1
Product Details
Star Wars The Clone Wars: Republic Heroes lets Star Wars fans young and old live out the sweeping galactic adventures of the Clone Wars. For the first time ever, players can fight as their favorite Jedi and clone troopers from the preeminent animated television series from familiar faces like Anakin Skywalker to new heroes like Clone Captain Rex. A brand-new storyline, which bridges the gap between season one and two, takes the player on a multi-faceted adventure to stop a mysterious techno assassin’s destructive plot. Built around two-player cooperative action, the accessible controls and family-friendly gameplay bring Star Wars fans across generations together like never before. Features Experience an all-new and exciting Clone Wars storyline that bridges the gap between season one and two of the TV series as you learn more about the mysterious bounty hunter Cad Bane and hunt down the all-new Skakoan super villain Kul Teska Play as your favorite Jedi heroes including Anakin Skywalker, Obi-Wan Kenobi, Ahsoka Tano, Mace Windu, and Kit Fisto Slice and dice your way through Separatist droids with your lightsaber and Force powers and use your agility to perform amazing leaps and navigate levels filled with interactivity Turn your enemies into weapons as you commandeer droids and use their unique abilities to blast enemies and solve puzzles as a Jedi Be part of an elite clone trooper squad with unique gameplay that puts firepower at your fingertips. Blast droids and unleash devastation with heavy weapons like rocket launchers and thermal detonators as Commander Cody, Captain Rex and all of your favorite clone troopers Compete against a friend with in-level challenges for rewards and points to be spent to upgrade your character and unlock bonus items Experience an expanded season one story that features intuitive touch-screen gameplay on the Nintendo DS
Save this product for later