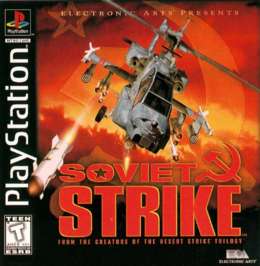 SKU 014633075854
$8.00
In stock
1
Product Details
After the collapse of the Soviet Union, terrorists try to take advantage of the lax security and steal nuclear warheads. Now, it is up to you to strap yourself into the cockpit of a Super Apache attack helicopter and terminate the terrorist threat in five Eastern European regions. You will fly several different types of missions, including rescue operations and bombing runs. Keep the world safe from nuclear terrorism in SOVIET STRIKE.
Save this product for later