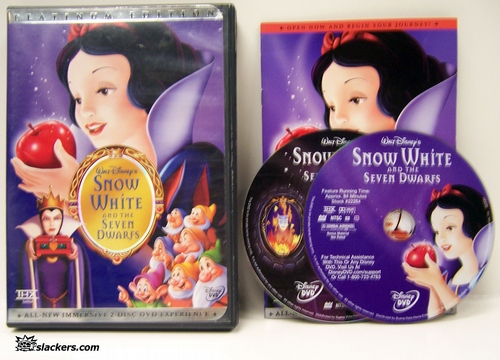 Movie description
Disney's first full-length animated masterpiece features all the elements of a classic fairy tale--a beautiful heroine, an evil queen, Prince Charming...and a septet of whistling dwarfs. In hiding from her jealous and wicked stepmother, the fair Snow White takes refuge with a band of kind-hearted, hard-working dwarves: Bashful, Sneezy, Sleepy, Happy, Grumpy, Dopey and Doc. Eventually the vain queen finds Snow White and tricks her into eating a poisoned apple. Luckily, a wandering prince comes to her rescue, but can he break the evil queen's spell? Based on the Brothers Grimm fairy tale, SNOW WHITE AND THE SEVEN DWARFS was initially thought a crazy idea for a feature film by those at Walt Disney. However, its lush production and charming characters proved otherwise. Standing the test of time since its release in 1937, the film has entranced audiences for decades, teaching them to never be vain and always whistle while they work.