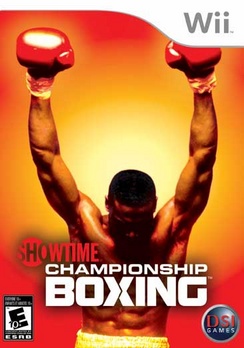 SKU 802068101442
$10.00
In stock
1
Product Details
The video games, entitled “Showtime Championship Boxing,” will take full advantage of both platforms’ interactive features. The boxers will be controlled through a touch-pad and stylus in the Nintendo DS™ game, while the users’ body movements will control the boxers in the Wii™ version. Both games will feature 14 boxers fighting it out in four different fight locations—Chicago, New York, Los Angeles, and Las Vegas. Boxers can block, dodge, punch, and throw combos in three different modes. The Title Belt fight mode will take the player through multiple rounds and opponents in a quest to become champion of the world. Players can also take advantage of wireless capabilities when fighting head-to-head with a friend. Showtime Championship Boxing, now in its 21st year, has set itself apart by televising the most competitive, compelling and significant match-ups in the sport. The series was born in 1986 when “Marvelous” Marvin Hagler defeated John “The Beast” Mugabi with a spectacular and unforgettable 11th-round knockout in Las Vegas. Since that time, the network has aired some of the most historic fights in boxing including both Evander Holyfield-Mike Tyson mega-events. 14 boxers-7 heavyweights, 7 welterweights 4 different ring environments-Chicago, New York, Las Vegas, Los Angeles Player can unlock other boxers as Title Belt Series progresses Fights can be between four and twelve rounds 3rd person camera view 6 modes - Single Fight, Amateur Belt, Contender Belt, Showtime Belt, King of the Ring, and Multiplayer Decisions are made based on TKOs, KOs, or points Game actions are controlled by either drawing on the touch screen with the stylus or by using the D-pad and buttons
Save this product for later