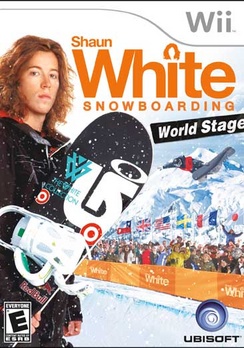 SKU 008888175704
$10.00
In stock
1
Product Details
In this sequel to 2008’s hit game Shaun White Snowboarding: Road Trip, Shaun White Snowboarding: World Stage follows Shaun White and his crew of friends as they go from chasing the best powder to pursuing the world’s top competitions. You and Shaun will hit the slopes once again, but this time the stakes are higher; zig- zag across the globe to ride against the best of the best and take your place on the world stage. Ubisoft has teamed up with action sports superathelete Shaun White to bring the most immersive experience to the Nintendo Wii. Shaun White Snowboarding: World Stage infuses the experience with the most authentic elements of Shaun’s riding style, personality, and sense of humor. Become the world’s best snowboarding crew You and Shaun White will guide the World’s best riders to the very top of the world rankings. Every challenge is an opportunity to increase your level of prestige on the world stage. Participate in bigger and more varied challenges across the globe until you’re finally ready to take on the world’s top boarders in the ultimate competition. Tons of new powder to ride From a half pipe in the middle of New York’s Times Square to the most prestigious competitions in France, Canada, and Japan. Ride a ton of unforgettable locations to which only the world’s best crews have access. Explore eight huge mountains for 75 unique challenges. Seamless co-op multiplayer Invite up to three friends to be a part of your crew at any point in the game. All of the progress you achieve together fully carries over to your single-player career. With a multitude of dedicated co-operative and competitive modes to explore, you can be sure that the intensity of the action on the slopes will be matched in the living room. Once you’ve posted a score you’re proud of, see how you stack up against players from across the world using all-new online leaderboards. More characters, More customization Recruit riders from around the world! Every addition to your group brings a new way to ride and trick! Unlock a variety of authentic boots, boards, jackets, helmets and stickers as rewards for completing the game’s many challenges. A deep experience you’ll want to keep playing You’re in total control of how you want to play the game. With the all-new season competition calendar, you’ll always have a wide variety of new locations to race, trick, grind, and grab air. Replay your favorite runs to unlock each map’s unique achievements, earning you keepsakes of your accomplishments and special rewards. Everyone can hit the Slopes with the Wii The Wii makes it easy to free ride or compete. The Balance Board lets you control your jumps and tricks with the intuitiveness and fun of having a snowboard in your own living room.
Save this product for later