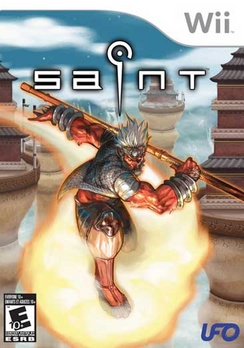 SKU 695771900538
$10.00
In stock
1
Product Details
THE POWERS OF THE GODS THAT LAY DORMANT INSIDE YOU MUST NOW BE UNLEASHED. THE FORBIDDEN POWER MUST BE USED TO RESTORE ORDER AS EVIL FORCES OVERRUN YOUR LANDS. YOU ARE LEGEND. YOU ARE THE SAINT! This modern re-imagining of the ancient folklore of the Monkey King takes you to a gritty parallel universe, where you will be confronted by swarms of mythical beasts and enemies. Shoot, evade and unleash your mystical powers to save your Kingdom from ruin! SAINT Key Features: Multiple Weapons and Power Ups Combat the enemy with over 12 different upgradeable weapons, such as Whirlwind, Black Hole, Raging Dragon and more. Fit and match weapon combinations that suit your playing style. Modes and Level Design With 20+ stages and several different modes of play, such as Story and 2 Player Co-op Mode, this title has extended replay value and content. 3D Game Play Taking elements from retro shoot'em ups' play style mixed with new era technology, this title brings extra 3D scrolling levels that the other standard shoot'em up titles don't have. Classic Arcade Feel Bringing the features of retro arcade shooters' game play right to your fingertips, shoot, destroy and evade the swarms of enemy bullets in this manic side scrolling shooter!
Save this product for later