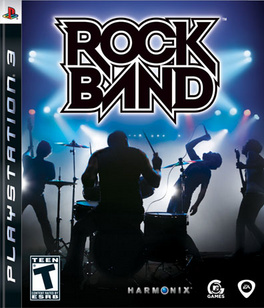 SKU 014633158700
$5.00
In stock
1
Product Details
Developed by Harmonix, creators of the blockbuster Guitar Hero franchise, Rock Band is an all-new platform for gamers to experience music, giving players the chance to rock in the shoes of the biggest guitarists, bassists, drummers and singers of all time -- as a solo superstar or as part of a hard rocking band. Rock Band delivers four music games in one -- challenging rockers to master lead guitar, bass guitar, drums and vocals. Built on unprecedented deals with top record labels and music publishers, the music featured in Rock Band spans all genres of rock and includes many master recordings from legendary artists. Rock out your way! Players can beat on drums, sing along, groove as a bassist and shred riffs as guitarists (using a licensed replica of the legendary Fender Stratocaster) -- either in single player career mode leading a band, in multiplayer as part of the band, or against each other -- in person or online! Unrivaled song library! Major record labels and leading music publishers have signed on to provide unrivaled access to master recordings and legendary rock artists -- from punk, metal and alternative to classic and southern rock of the 60s, 70, 80s, 90s and 2000s. Fully customizable! Form your own band, create and customize your own rocker, and then travel on a fast rise to fame around the world in a quest for rock 'n' roll glory! Rock 'n' Roll Never Dies! Supports downloadable content for never-ending challenges. Play together in your living room or across the world! Rock Band offers deep online functionality, allowing players to rock together whether they're in Rhode Island or Reykjavik. Rock Band ships with 40 of the most epic rock acts ever (with downloadable songs and albums to come)! Nirvana's “In Bloom”, Metallica“s “Enter Sandman”, Queens of the Stone Age's “Go With The Flow”, Foo Figthers' “Learn to Fly”, The Hives' “Main Offender”, Mountain's “Mississippi Queen”, Black Sabbath's “Paranoid”, The Strokes' “Reptilia”, The Ramones' “Rockaway Beach”, Weezer's “Say It Ain't So”, David Bowie's “Suffragette City”, Rush's “Tom Sawyer”, Stone Temple Pilots' “Vasoline”, Bon Jovi's “Wanted Dead or Alive”, The Who's “Won't Get Fooled Again” -- AND MORE!
Save this product for later