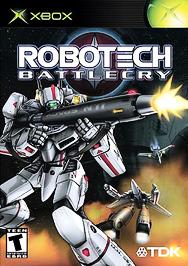 SKU 739069640024
$8.00
In stock
1
Product Details
ROBOTECH: Battlecry is a mission driven, third person action game that takes the classic mecha-filled mayhem of the animated television series and translates it into an exciting real-time 3D game. In this high-octane arcade shooter, players take the role of intrepid fighter pilot Jack Archer, who must put his skills to the test in a desperate struggle to aid the Robotech Defense Force (RDF) in safeguarding the planet Earth against the evil alien forces of the Zentraedi armada. Players control the Veritech fighter, a unique mecha capable of ground-based fighting in robot form, or quickly transformable into a fast attack fighter for aerial dog fighting.
Save this product for later