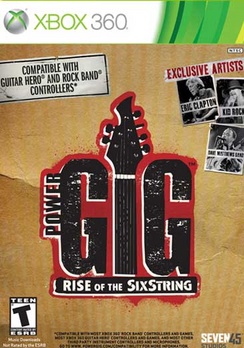 SKU 815427010040
$12.00
In stock
1
Product Details
Power Gig: Rise of the Six String is the next evolution of band based music games. The game introduces players to a world where music is power and heroic and villainous rockers battle for control. Each player takes on the role of one of these rockers as they attempt to unite and retake the world from the oppressive rule of the Headliner. Gameplay allows up to 3 players to take on the role of a guitarist, drummer, & singer. The game utilizes a set of revolutionary new instrument peripherals headlined by the SixString Guitar Controller. The SixString evolves guitar controllers from buttons to real strings, giving players a more authentic gameplay experience and providing the option to make the experience even more real through Power Chord mode, which integrates songs’ real power chords into gameplay. The game also uses Seven45 Studios new drum controller, which will revolutionize how games play drums as well. Both of these peripherals together give players a more true-to-life, immersive, and unique music performance experience. The game also ups the authenticity factor by featuring hit master recordings of songs from major artists whose music has never before been available to play within a music game. Brand New Peripherals o The SixString Guitar Controller creates a more authentic gameplay experience through its use of real guitar strings rather than buttons. Allows for advanced modes of play that integrate real guitar playing and skills into gameplay that is both fun and entertaining. Outside of the game world, the SixString is a fully functional electric guitar. Power Gig proprietary Drum Controller: Move Info Coming Power Gig Microphone All controllers are compatible with most music games. Full band gameplay allowing up to three players, one each, on guitar, drums and microphone Rock and Roll Adventure o Each of up to 3 players can take on the role of one of six heroic rockers as they embark on an epic quest to overthrow the oppressive headliner who has brought disharmony to the world of the game As players progress through the story of the game, they will meet interesting characters, learn how to harness and employ mystical power, and discover who they truly are and what they are capable of in this unique world. Unique Gameplay Modes o Chording Mode gameplay allows players to gain fundamental guitar skills that will put them on the path to playing real music offline. A robust mode that contains game tutorials, tools, and lessons that will help players better acclimate themselves to the peripherals of Power Gig, the world of the game, and real musicianship outside of the game world.
Save this product for later
Display prices in: USD