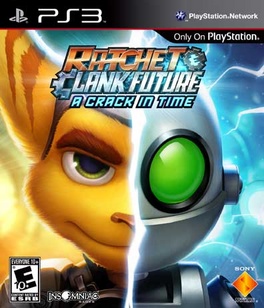 SKU 711719812425
$16.00
Out of stock
1
Product Details
Concluding the events set into motion by Ratchet & Clank® Future: Tools of Destruction, Ratchet & Clank® Future: A Crack in Time will at long last answer some of the franchise fans’ largest questions. After discovering that Clank’s disappearance was engineered by Dr. Nefarious, Ratchet races to rescue his best friend. Unfortunately, he discovers that Clank’s capture is just the beginning of Nefarious’s latest diabolical plot. In this follow-up to the best-selling series, Ratchet & Clank® Future: A Crack in Time puts players into the role of both Ratchet and Clank as they attempt to reunite and save the universe. Along the way, both will finally uncover the hidden truth behind their origins, and discover their ultimate destinies. As the duo come closer to reuniting, they’ll have to ask themselves the biggest question of all: Do Ratchet and Clank’s destinies lie with each other? Or is it finally time for the universe’s greatest duo to separate for good? Powered by Insomniac Games’ fourth-generation PLAYSTATION®3 technology, A Crack in Time will continue to bring the experience of playing your own CG-animated movie to the PS3. Players will use new gadgets such as Ratchet’s Hoverboots to explore levels and can take off in Ratchet’s ship to discover nearby moons and planets. Clank will use new abilities to manipulate time to try and stop Dr. Nefarious. Key Features An original new adventure and story that answers many of fans’ most-asked questions and wraps up the story arc that started in Ratchet & Clank® Future: Tools of Destruction and Ratchet & Clank® Future: Quest For Booty. Non-linear levels with plenty of hidden areas to explore, and new gadgets like the Hoverboots that let Ratchet soar to new heights. All-new Clank gameplay and special “Time” abilities that bring new meaning to “past selves”. The series’ renowned arsenal gets even larger with brand new weapons, as well as weapons that players can customize with various modifications. New space gameplay that gives players the opportunity to engage in space battles, explore the surrounding star system, and discover hidden items and collectables.
Save this product for later