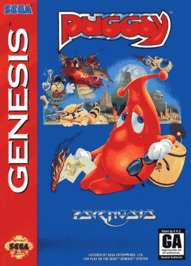 SKU 053203009912
$10.00
In stock
1
Product Details
Maybe he's not the most likely video game hero ever, but you'll be surprised to see what this orange blob can do. Make your way through more than 50 levels of intense gameplay, discovering secret rooms, extra levels, and tons of cool surprises. Solve puzzles and take on alien enemies in 17 of the strangest lands you've ever seen. Using a technology called Total Object Interaction, the game lets you control more than 40 interactive objects. The game features two different skill levels, incredible graphics, and some seriously addicting gameplay. Maybe it's time for Sonic to move over; Puggsy's one smart character.
Save this product for later
Display prices in: USD