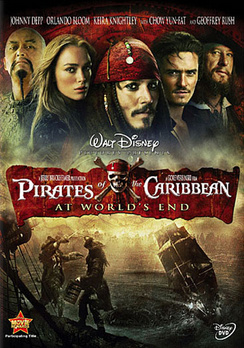 Pirates of the Caribbean: At World's End - DVD - Used

SKU 786936292992
$6.00
In stock
1
Product Details
In the follow-up to the record-breaking smash 2006 hit Pirates of the Caribbean: Dead Man's Chest, we find our heroes Will Turner (Orlando Bloom), Elizabeth Swann (Keira Knightley) allied with Captain Barbossa (Geoffrey Rush) in a desperate quest to free Captain Jack Sparrow (Johnny Depp) from his mind-bending trap in Davy Jones' locker -- while the terrifying ghost ship, The Flying Dutchman and Davy Jones, under the control of the East India Trading Company, wreaks havoc across the Seven Seas. Navigating through treachery, betrayal and wild waters, they must forge their way to exotic Singapore and confront the cunning Chinese Pirate Sao Feng (Chow Yun-Fat). Now headed beyond the very ends of the earth, each must ultimately choose a side in a final, titanic battle -- as not only their lives and fortunes, but the entire future of the freedom-loving Pirate way, hangs in the balance.
Save this product for later