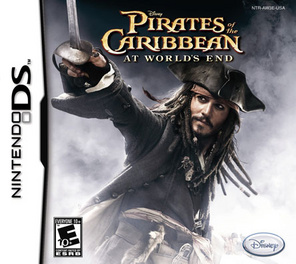 Pirates Of The Caribbean: At World's End - DS - Used

SKU 712725003333
$8.00
In stock
1
Product Details
On May 22, Disney's popular Pirates of the Caribbean franchise arrives in the video game, Pirates of the Caribbean: At World's End. Based on the upcoming film of the same name as well as its prequel, Dead Man's Chest, the game lets players battle against numerous enemies as Captain Jack Sparrow, Elizabeth Swann and Will Turner, at times switching between them and teaming up for devastating co-op maneuvers. The gorgeous world includes a host of locales to explore, such as Port Royale, jungles and of course, the open ocean. Along with skewering other pirates, players will also slice and dice Davy Jones' henchmen and the humongous Kraken. When not slaughtering people, they'll hunt for buried treasure and solve puzzles. Providing developer Eurocom tightens the combat and keeps things interesting, At World's End should be a sweet movie companion.
Save this product for later
Display prices in: USD