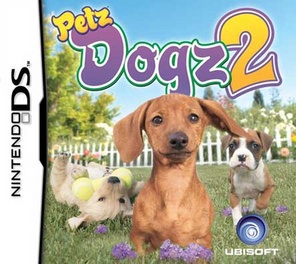 SKU 008888163220
$10.00
In stock
1
Product Details
Ubisoft’s Petz® line of games allows young players to create and care for cute, furry pets chosen from many different breeds of dogs, cats, horses, hamsters, and dolphins. Players can take their pets everywhere within the virtual environment, from inside the house to outside, walking around the neighborhood or visiting friends. The Petz games are designed to entertain and engage players but are also a great way for young players to learn and take care of their own pet. Ubisoft’s Petz series has already won over a huge audience: • More than 3.5 million units have been sold worldwide in fiscal year 2006–07. • The Petz series was the number three-selling brand on Nintendo DS in December 2006–February 2007. • Petz games have sold more than 1.4 million copies on PC since their introduction. Recognizing the phenomenal growth of the casual gaming market and the current success of the Petz series, Ubisoft will continue to grow the series with additional games as part of the company’s long-term vision for casual gaming. Petz Dogz® 2 (DS) allows players to pick their favorite puppy from 11 breeds, including all-new Boxer and Dalmatian. • Use the DS microphone to train your puppy with 14 voice commands. • Customize your house and backyard with more than 250 items. • Have fun with 18 new mini-games including seven card games you can play with friends.
Save this product for later