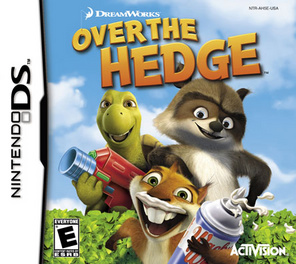 SKU 047875814592
$18.00
In stock
1
Product Details
Over the Hedge challenges players to three zany animal tales inspired by the upcoming DreamWorks Animation feature film. Meet a group of woodland creatures on a mission to take back the neighborhood. When a housing development intrudes on their woodland habitat and an opossum is kidnapped by an evil exterminator, three wise-cracking rodents and one very neurotic reptile invade the 'burbs in a quest to rescue their friend. Battle the exterminator and his army of mind-controlled mammals, and save the forest (and your own hide) from the world's peskiest critter-man. Product Features - Over 30 Levels in Destructible Environments - They say the 'burbs are safe, but that's only if you're a human. The exterminator has tampered with nearly every backyard BBQ and countertop kitchen widget on the human side of the hedge. You'll need more than the right weapon to beat this animal army. It'll take stealth, smarts and a whole lot of critter combat to navigate the trap-laden, interactive environment and complete over 30 missions. - Cooperative Multiplayer - Play as your favorite four-legged characters from the movie: RJ, the crafty raccoon; Verne, the hard-shelled but soft-hearted turtle; Hammy, the utterly oblivious, overactive squirrel; and Stella, the razor-tongued skunk. Play alone or with a friend. Choose two characters and switch between them on the fly. - Powerful Super Moves - Shake up the neighborhood with powerful super moves and tag-team two characters' special moves to stop the exterminator's onslaught. Unleash RJ's meteoric golf ball barrage, or use Verne to launch a dizzying shell strike. Take out baddies in a flash with "Hammy Time," or uncork Stella's magnificently malodorous stink attack. - Mini-Games - Disarm the exterminator's numerous traps and earn loot to customize your forest digs. Unlock comic, 'burbs-inspired mini-games like Golf Cart Derby, RC Racing and Suburban Mini-Golf.
Save this product for later