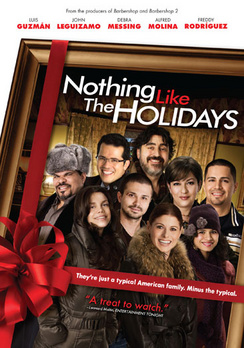 SKU 013138004093
$6.00
In stock
1
Product Details
It's Christmastime and the far-flung members of the Rodriguez family are converging at their parents' home in Chicago to celebrate the season and rejoice in their youngest brother's safe return from combat overseas. For Jesse, coming home has rekindled feelings for an old flame, although she can't seem to forgive him for leaving. His older sister Roxanna, a struggling actress, has been chasing her Hollywood dreams for years with little to show for it. And much to the dismay of their mother Anna, eldest brother Mauricio brings home a high-powered executive wife who would rather raise capital than a child. In the course of one eventful week, traditions will be celebrated, secrets revealed and major life decisions made. It all begins when Anna announces to her children she is divorcing their father Eduardo. The shock waves from this familial upheaval prompt Roxanna, Mauricio and Jesse, each in their own way, to reevaluate the past and rethink the future. But when the Rodriguezes learn that one of their own is facing a true crisis, they instinctively pull together: Old resentments are forgotten, familial bonds are re-affirmed and the healing power of laughter works its magic as the family discovers they are much stronger than they ever realized.
Save this product for later
Display prices in: USD