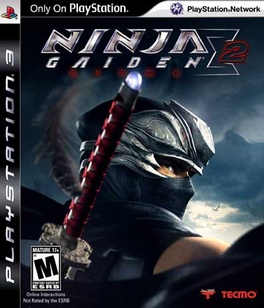 SKU 018946010625
$20.00
In stock
1
Product Details
The most intense, challenging, action-packed ninja adventure is back, exclusively on the PLAYSTATION®3 computer entertainment system! Ninja Gaiden Sigma 2 is the “ultimate” Ninja Gaiden, featuring characters from the previous installments that have defined the franchise. It radiates a striking visual appeal in high resolution display, featuring character and environmental graphics whose quality exceeds the original Ninja Gaiden Sigma. Combining both melee and long-range battles against enemies, the game requires skillful and strategic playing to successfully journey through the missions. As super ninja Ryu Hayabusa, you roam the world and hunt down the Demon Statue that was stolen by the Black Spider Ninja Clan to prevent the resurrection of the evil Archfiend. From Tokyo to New York, follow Ryu as he encounters vicious enemies and acquires an extensive assortment of ninja weaponry along the way. Features New Playable Characters: Ninja Gaiden’s Rachel, Ayane from Dead or Alive and Momiji from Ninja Gaiden Dragon Sword appear as sexy new playable characters Online Co-op: Two people can engage in online co-op play, with voice chat, in 10 different stages (in 4 difficulty settings) to complete special missions. Rankings from each mission are recorded and posted online, where gamers can choose their opponents based on players’ mission stats. Visual Diversity: Over 30 unique characters, 17 stages with a variety of environments, and a storyline which unfolds in 70 impressive cutscenes New Enemies: A variety of new enemies and bosses have been incorporated into the stunning enhanced environments Variable AI: Contributing to the increased difficulty level, the gameplay differs each time you appear in a level as enemies engage in a variety of different actions as they assess the current situation Gameplay Innovation: A finishing blow system can be used in battle to quickly defeat an enemy in one dynamic action Weapon Rewards: The weapons you acquire can be leveled up to strengthen their power and gain new battle techniques Enhanced Graphics and Sound: Full HD 1080p output and 5.1ch surround sound allows you to experience the game in total high definition
Save this product for later