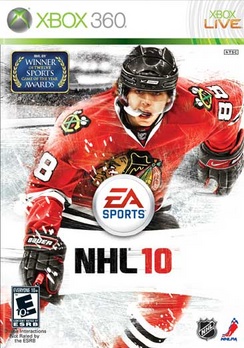 SKU 014633157093
$8.00
In stock
1
Product Details
On ice toughness and intimidation is taken to a new level in NHL 10 where winning one-on-one battles for possession of the puck along the boards becomes a test of will and skill. Utilizing an all-new board physics engine, players can use their body to shield the puck on the boards and then kick-pass it to teammates. Bigger, stronger players pin opponents to the boards while fanatical fans bang on the glass, just like real life. Fore-check defenders, pressure the puck and finish checks to intimidate your opponent into mistakes. Players fatigue, bobble passes, and avoid collisions under threat of constant physical pressure. Inspire teammates, ignite the fans and change the momentum of a game by instigating scrums, drawing penalties, and mixing it up all after the referee blows the whistle! NHL 10 features more than 200 gameplay refinements that replicate the skill and finesse of hockey and deliver the most responsive and authentic action ever for the series. Players can one-time loose pucks, score from their knees, knock pucks out of the air and lift a leg to fake a shot on goal. A new 360? precision passing mechanic delivers control over the speed and direction of passes so players can bank passes off the boards or play the puck into space for teammates to skate on to it. Plus, all-new interactive crowds bring the emotion of playoff hockey to life with towel-waving fans, glass bangers and crowds that react to the action on the ice.
Save this product for later
Display prices in: USD