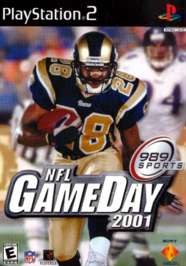 SKU 711719710622
$1.00
In stock
1
Product Details
Take to the field with 989 Studios'debut on the PlayStation 2 with NFL GAMEDAY 2001. With the revolutionary Total Control Passing system, you'll see your plays executed through a series of realistic shoestring, tiptoe, one-handed and across-the-body catches, and you can even under or overthrow receivers using the analog buttons. Also, because of the PS2's visual capabilities, players are proportionate to their weight and height and feature varying skin tones, neck rolls, tattoos and facemask styles. If you're a football fan, don't drop the ball on NFL GAMEDAY 2001, pick it up today!
Save this product for later