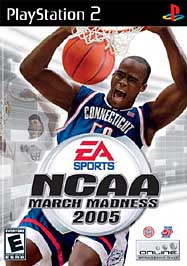 SKU 014633148169
$3.00
Out of stock
1
Product Details
Emeka Okafor, the University of Connecticut All-American who led the Huskies to the 2004 NCAA Men's Basketball Championship, will take control of the EA SPORTS college hoops court this season, as the spokesman and cover athlete for NCAA MARCH MADNESS 2005. Okafor averaged 17.6 points and 11.5 rebounds per game in leading Connecticut to a 33-6 overall record, the national title, and the Big East Tournament title in 2004. He was named Co-National Player of the Year, a unanimous First-Team All-American, and the Big East Player of the Year following a stellar junior season that also saw him earn his second straight Academic All-America nod. After graduating from UConn this past May in just three years with a 3.8 GPA and a degree in finance, Okafor was the No. 2 overall pick of the June NBA Draft by the Charlotte Bobcats. He also earned a bronze medal last month in Athens, Greece as a member of the 2004 United States Olympic Men’s Basketball Team.
Save this product for later