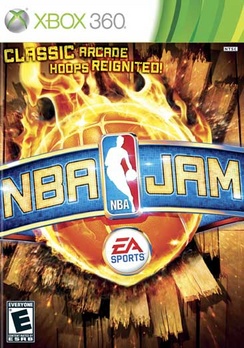 SKU 014633195767
$18.00
Out of stock
1
Product Details
EA SPORTS is bringing NBA JAM to a 2010 audience with everything that fans remember about the original (revolutionary visuals, over-the top gameplay and numerous unlocks and cheat codes) PLUS online capability. The winner of 8 “Best Sports Game of E3” award, including the Game Critics Award, NBA JAM is a high-octane video game that is fun for everyone! An Enhanced Original! - EA SPORTS’ version of NBA JAM has the off-the-charts fun factor of the original with updated gameplay that looks and feels better than ever - in full HD! EXCLUSIVE TO Xbox 360 & PlayStation 3 - Play Online! - Play Classic 2-on-2, Co-op Team Play, and Remix games ONLINE with a jam-packed progression system, unlockable challenges, and hundreds of rewards. Classic Campaign… With A Twist! - As fans try to beat all 30 NBA teams in the Classic Campaign journey, they will face some extra challenges: secret 2 on 2 Boss Battles against NBA Legends! Unlockables Galore! - Players of NBA JAM can earn and unlock more than 100 cheat codes, secret characters and legendary NBA players. Secret characters were a big part of the original and EA SPORTS is committed to keeping the spirit of past unlocks alive (wink, wink). Many Ways to Play the Game! - Fans can play Solo, Versus (against another player) or Co-op (with another player against the AI) modes. No matter how you like to play the game, you will have tons of fun playing NBA JAM. A True “Pick up and Play” Experience! - The control system is very simple for those new to sports games yet they also have enough depth to satisfy passionate gamers who seek challenge around every corner.
Save this product for later