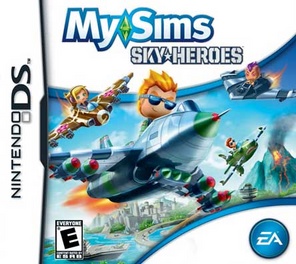 SKU 014633194081
$12.00
In stock
1
Product Details
Take to the sky to lead the resistance against Morcubus and his drone army and to stop his plans to take over the skyways. MySims SkyHeroes is an all new adventure that brings the thrill and high speed action of flying to the creative, immersive world of MySims. Go from unknown pilot to celebrated hero as you test your reflexes in fast-paced speed challenges and defeat dangerous enemies in aerial dogfights that demand all your skill as a pilot to survive. As you progress, you build, customize and tune your aircraft to give you an edge in combat upgrade your wings for swifter maneuvers, switch out your engine for a speed boost, or change the paint job to camouflage your plane and avoid enemy fire. Face Morcubus’ drones with an ally in two-player cooperative online gameplay, or challenge your friends in fun, competitive four-player high speed action. Morcubus and his drones must be stopped; will you rise to the challenge?! Adventure Story Become the Hero who defeats Morcubus and saves the skies from tyranny Air Combat Take on dangerous enemies in high speed air battles that range from dogfights to air raids to rescue missions Customization Build & tune your aircraft to optimize it for battle Up to Four Players Fly with or against your friends in online co-op and PvP gameplay
Save this product for later