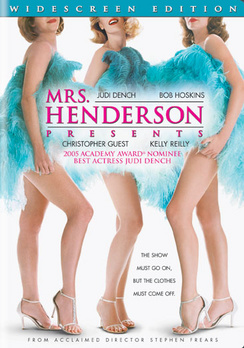 SKU 796019790994
$3.00
In stock
1
Product Details
Mrs. Laura Henderson may be a widow but she is by no means going to spend the rest her days playing bridge. The Windmill Theater becomes her game and the infamous showman Vivian Van Dam becomes her partner and fiercest opponent. The Germans are bombing London but the roar of the Windmill is all that can be heard, as Laura convinces Lord Cromer to allow her actresses to be the one thing no one could ever imagine: Nude. Brought to its knees by war, what Mrs. Henderson Presents brings a nation to its feet in applause.
Save this product for later