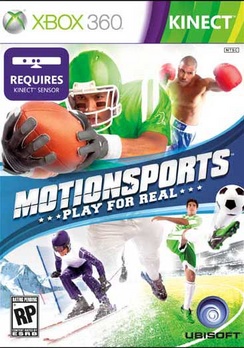 SKU 008888526360
$5.00
Out of stock
1
Product Details
MotionSports™ is a new sports title exclusive to Microsoft’s “Project Natal” (final name TBA) that will bring players unparalleled immersion, as the movements they make in real-time are accurately represented by the on-screen athletes. Exciting sports challenges include skiing, horseback riding, hang gliding, football, soccer and boxing. WIDE RANGE OF SPORTS Race down the slopes of a Super G slalom, score a mind-blowing penalty shot, duck-and-run your way to a game-winning touchdown or throw punches at the champ. CONTROLLER-FREE COMPETITION Using precision motion control technology to track your every movement you are in total control of the on-screen action. No controllers, no pads, no limits. THE THRILL OF VICTORY The competition heats up as you take on your friends in head-to-head challenges to decide who the ultimate athlete is. LIVE FROM YOUR LIVING ROOM Your performances are broadcast on the in-game TV channel, with live commentators welcoming players to the game and commenting on every challenge with a humorous tone including your hits…and misses. CLIMB TO GREATNESS The player beginning as local celebrity earns national and international acclaim, winning over fans and attracting media coverage. Track your sports achievements as you go from local hero to global superstar. Share your data with your friends online and attract legions of adoring fans, and also see your face on the cover of in-game magazines.
Save this product for later
Display prices in: USD