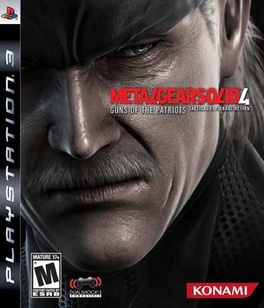 SKU 083717201601
$5.00
In stock
1
Product Details
Metal Gear Solid 4: Guns of the Patriots is the final chapter in the saga of Solid Snake which sends him around the world in pursuit of his arch nemesis, Liquid Ocelot. Armed with new gadgets and abilities, Solid Snake must shift the tides of war into his favor, using the chaos of the battlefield to infiltrate deep into enemy territory. In his globetrotting final mission, Snake must sneak deep into enemy locations in the Middle East, South America, and other corners of the earth to foil Liquid Ocelot's plans for total world domination. Key Features: MGS4 pushes the power of the PLAYSTATION(R) 3 to its limits with cutting edge graphics and surround sound. It also aims to be the hallmark title for the new DUALSHOCK(R)3 controller. Command Snake in his final mission which spans the entire globe as he attempts to foil Liquid Ocelot and his massive army of PMCs. Influence the tides of war through both passive and active means. Snake can directly aid local militia who engage invading PMCs soldiers, or encourage more fighting to slip past undetected amidst the commotion. Unlock custom weapons and modifications as you trade weapons with your black market weapons dealer, Drebin. Providing Snake with his most advanced stealth suit to date, OctoCamo allows Snake to blend in with his environment as it digitally manifests nearby textures in real time. Otacon is back to support Snake by providing new high tech gadgets, including Metal Gear Mk. II, the ultimate reconnaissance tool, and Solid Eye, which gives Snake real-time information on enemies and his surroundings.
Save this product for later