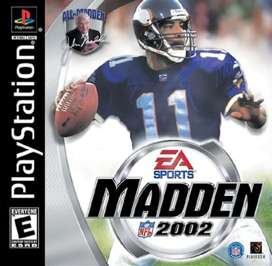 SKU 014633143348
$5.00
In stock
1
Product Details
John Madden and EA Sports ride again in this update on the 12-year-old football game. Realistic pigskin physics and motion-capture animation deliver the NFL just as it appears on TV, and all the action is called by John Madden (of course). In addition to the standard Season and Franchise modes, the 2002 installment boasts the inclusion of Two-Minute Drill, Create-a-Team (in which you start your own NFL squad), and Coach's Corner. Up to four players can enjoy all of the action.
Save this product for later