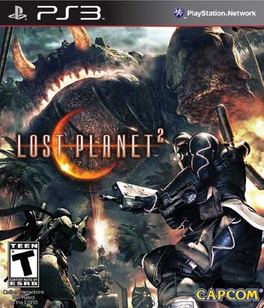 SKU 013388340187
$18.00
In stock
1
Product Details
The next installment in the popular action series returns in Lost Planet 2. Lost Planet®: Extreme Condition, the landmark third-person shooter that debuted on Xbox 360, went on to sell over 2.2 million units worldwide after its release. Lost Planet 2, will offer deeper insight into the world of E.D.N III and the uncertain fate of future mankind. A decade has passed since the first game, and the face of E.D.N. III has changed dramatically. Terraforming efforts have been successful and the ice has begun to melt, giving way to lush tropical jungles and harsh unforgiving deserts. Players will enter this new environment and follow the exploits of their own customized snow pirate on their quest to seize control of the changing planet. Players will control their heroes across 6 interconnected episodes, creating a truly unique interactive experience that changes depending upon the actions of the players involved. With this concept, players will have the opportunity to engage in the story in a much more dynamic way as plot threads evolve from different players’ perspectives. Beyond the deep single player mode, Lost Planet 2 is loaded with extensive multiplayer modes. The intense and action packed campaign mode comes with the ability to form teams of up to 4 players online to clear mission objectives with friends. The grappling hooks that made the gameplay in Lost Planet a true 3-D experience are back, allowing gamers to gain tactical advantage by quickly scaling buildings. No action game would be complete without an arsenal of weaponry, and Lost Planet 2 has a huge variety of hardware for players to unleash on unsuspecting enemies. Machine guns, shotguns, rocket launchers, lasers, sniper rifles, grenades and a host of other weapons are scattered across the game. However, Lost Planet 2’s biggest weapons come on two legs: the heavily armed and armored robotic Vital Suits return in greater numbers and variety than the first game. There are VS that transform into other vehicles, hold up to three players and some that even take multiple players to operate. Features 4-player co-op action: Team up to battle the giant Akrid in explosive 4 player co-operative play. Teamwork is the player’s key to victory as the team is dependent on each other to succeed and survive. Single-player game evolves based on players decisions and actions Deep level of character customization: Players will have hundreds of different ways to customize their look to truly help them define their character on the battlefield both on- and offline. Certain weapons can also be customized to suit individual player style. Beautiful massive environments: Capcom’s advanced graphics engine, MT Framework 2.0, will bring the game to life with the next step in 3D fidelity and performance. Massive scale of enemies: Players skill on the battlefield and work as a team will be tested like never before against the giant Akrid. Players will utilize teamwork tactics, new weapons and a variety of vital suits (VS) to fight these larger-than-life bosses. Rewards System- Players will receive rewards for assisting teammates and contributing to the team’s success Multiplayer modes and online ranking system Exciting new VS features- Based on fan feedback, the team has implemented an unbelievable variety of Vital Suits and new ways to combat VS overall . The new VS sytem will have a powerful impact on the way the player takes to the war zone in Lost Planet 2
Save this product for later
Display prices in: USD