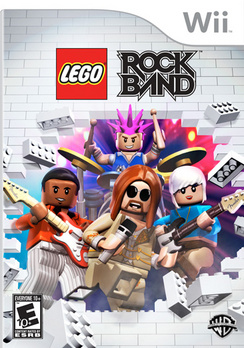 SKU 883929077809
$12.00
In stock
1
Product Details
Players will become rockers as they embark on a journey to stardom that the whole family can enjoy as they work their way through local venues, stadiums and fantasy locations on Earth and beyond that mimic the imaginative settings that the LEGO world offers. Also continuing the LEGO “build-and-play” gaming experience, players will be able to create their own LEGO Rock Band style as they customize their minifigure avatars, band and entourage, including roadies, managers and crew. LEGO Rock Band supports Rock Band instruments, as well as other music game controllers. The game, which will allow families, tweens and teens to experience a wild journey to rock stardom where they can “Build a Band and Rock the Universe,” will be available for the Xbox 360® video game and entertainment system from Microsoft, PLAYSTATION®3 computer entertainment system and Wii™ home videogame console. LEGO Rock Band for Nintendo DS™ will be developed by TT Games in partnership with Backbone Entertainment, a Foundation 9 Entertainment studio. All versions are scheduled for release holiday 2009. LEGO Rock Band combines the multiplayer music experience of Rock Band® with the fun, customization and humor of the LEGO videogame franchise packed with brilliant chart-topping songs and classic favorites suitable for younger audiences, including: Blur: “Song 2” Carl Douglas: “Kung Fu Fighting” Europe: “The Final Countdown” Good Charlotte: “Boys and Girls” Pink: “So What” Forget becoming the biggest Rock Band in the world… become the biggest Rock Band in the universe! LEGO style and humor take Rock Band to an all-new level; experience fun for the whole family on a wild journey to rock stardom culminating in the ultimate rock gig that will take you out of this world! Songs You Know and Love • rock out to everything from current radio hits to past favorites the whole family will enjoy. LEGO Themed Rock Challenges • play killer riffs to destroy a giant robot, summon a storm and demolish a skyscraper using the power of rock! Enhanced Customizer • don’t stop with your avatar, customize your whole entourage! Design the band, roadies, and manager just the way you want! Build fame LEGO style • Collect LEGO bricks after each song to build cooler vehicles and move to new venues. LEGO Rock Den • buy furniture, decorate the walls and customize your band’s hang-out as you climb the ladder to rock success. An easier skill set option for budding musicians.
Save this product for later